Since its inception in the early 1990’s, Induction bolt heating has been the best method to loosen or
tighten large bolts and fasteners. There have however been many misconceptions along the way.
One article claimed the use of the sound waves, while some engineers questioned the thread damage
when bolts were disassembled. Some users were concerned about magnetic fields and “microwaves”.
While others were worried over metallurgical damage even though many of these bolts are on Turbine
shells that run for 7 years at 600-800 degrees F (tempering temperatures). None of these concerns are
an issue. 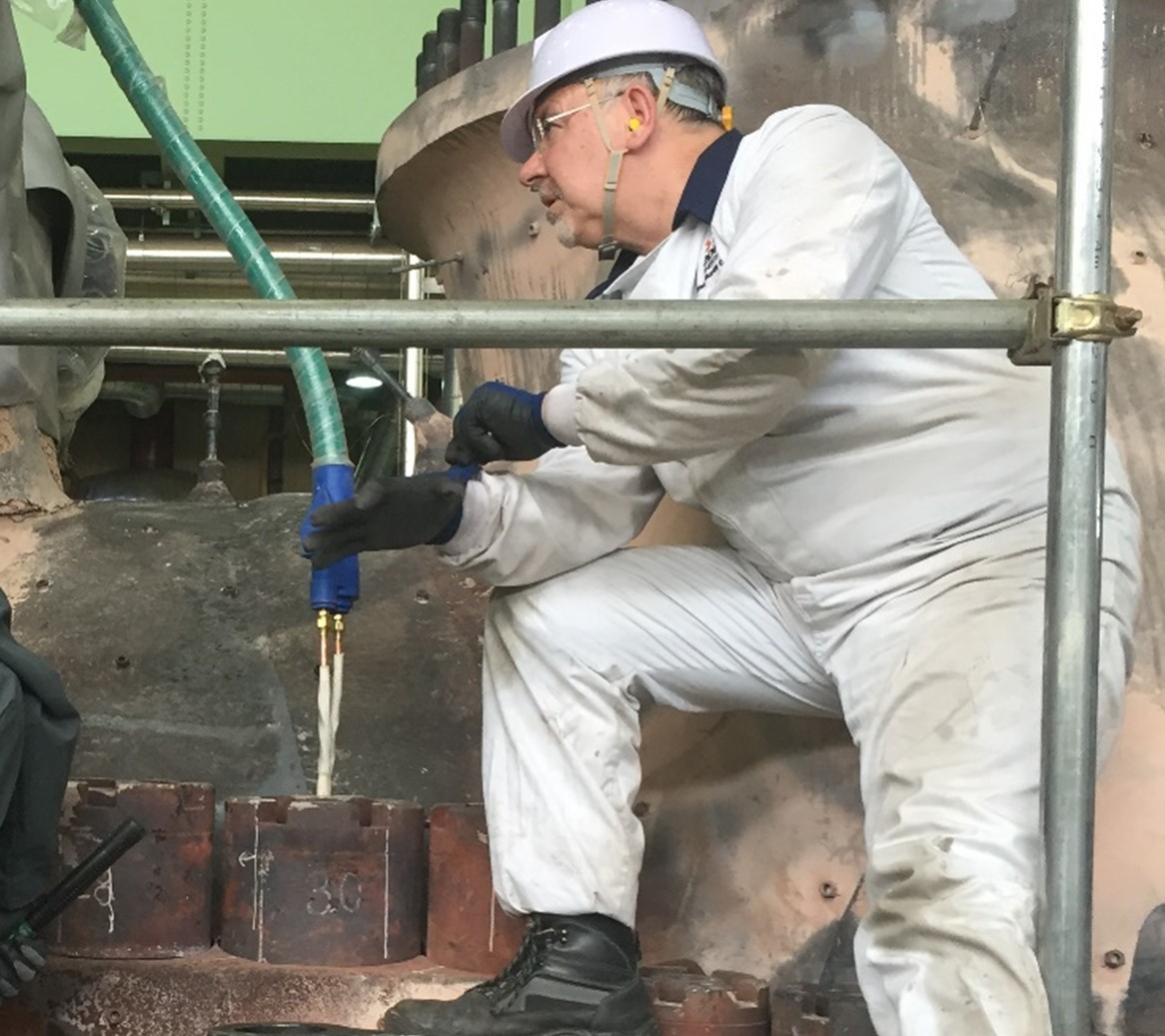 The science is both simple and complicated.

The simple explanation uses the Transformer analogy. An induction coil is put within the bore of the bolt, the inductor is the primary winding of a transformer. The alternating magnetic field the inductor
produces pushes electricity around within the bolt. This electricity is like a dead short on the secondary of a transformer. This dissipates 100% of the induced energy in the form of heat.

The complicated explanation involves a deep understanding of how induction coils are made and the use of flux concentrators as well as distance from the conductor of the coil to the part you wish to heat.

These involve a full understanding of the magnetic fields produced and the effects of frequency on these fields,                                                     as well as coupling this to an induction power supply that will supply the inductor with the
correct current and voltage. When done in a harmonious way, the efficiency is increased and thus
heating times are reduced. 2” diameter bolts with a ½” bore and 24” in length can easily be heated in
less than 30 seconds with some machines. These same systems can easily heat a 50” long 8” diameter
bolt with a 7/8 bore in 5 minutes.

Machine sizing depends on the intended bolt sizes and materials. Here at Thermo International we have
found that 50kW is the absolute minimum machine power for the power generation industry where
smaller turbines will have between 2” diameter up to 5” diameter bolts. A lesser powered machine will
take just as long as the old torch or combustion type heaters on the larger bolts and in some bolts with a
large bore the cal rod heaters easily match the power levels of lower powered machines. This eliminates
the time saving advantages of induction heating and introduces a complicated machine where it may
not be needed. In other cases, such as the newer gas turbines, bolts nearly 60” long made of Inconel
with large boars facilitate the need for an adaptable machine up to 120kW. Nuclear sized Turbines often
have bolts that exceed 8” in diameter, Here the need for a machine approaching 120kW is also
recommended.

Inductor sizing is also extremely important and dependent on the machines running frequency. This is
inverse to the heating efficiency where higher frequencies can heat faster. The factor at ply here is
distance from the inductor to the part being heated. The greater the distance the less the magnetic field
there is and this is exponential. In addition the higher the frequency the smaller the field’s effective
range is. Here at thermos International we have found that a range between 8
kHz and 12 khz is ideal. This range allows a greater mis match between the bore
and inductor while still allowing efficient coupling to the parts being heated.
This also facilitates the use of slightly longer or shorter heated lengths without
compromising heating times.

Bolt heating in a perfect world would be to only heat a bolt between its
clamping surfaces. For a turbine bolt or a flange bolt, this is heating only
between the two nuts. However, stocking using and carrying inductors for every
different length is simply not practical.

The time it takes to change over from
one inductor to the next for the minor differences in length can be far longer
than the loss in heating time for a slightly mis matched bore inductor
combination. This however assumes the machine runs in the lower frequency
ranges, the higher the frequency range of the machine and especially the lower
the power level of the machine and exact bore to inductor and heated lengths
become more essential. This in turn can increase the cost and increase the time
needed to complete a job because more inductor sizes are needed and more
inductor changes are needed.

Bolting patterns, in general for turbines we start in the center of each side of the turbine shell and work
towards each end. Some manufacturers or site specific conditions might dictate a different bolting
pattern but in general the bolt heating pattern is from the center out.

At Thermo International we believe we have the prefect combination of machine and inductor. This is
even before the tuning range of our machines and its advanced control system offers allowing an even
greater operating range.